You couldn’t miss the news, even the supermarkets are surfing on the wave and making promotion catalogues full of fried noodles, gyozas or bao buns: the year 2022 will be the year of the water tiger. Yes, I’m talking about the future because for the Chinese, we are not yet in the new year! I explain all about the year of the Tiger, one of the 12 animals of the Chinese zodiac.

The Chinese calendar: a lunisolar calendar

The Chinese calendar is a lunar-solar calendar, but above all a lunar calendar. Indeed, it is based on the phases of the moon. This means that each first day of the month corresponds to the new moon.
A solar calendar (like the Gregorian calendar) is a calendar that takes into account the cycles of the sun. Solar cycles are longer than lunar cycles. As a result, the lunar calendar lags behind the solar calendar (it is missing 11 days). How can we reconcile the two?

This is the purpose of a lunar-solar calendar: the idea is to make up for this delay by adding a lunar month to the solar calendar from time to time. Thus 7 extra months are added over a period of 19 years, so that the calendar based on the cycles of the moon remains consistent with the one based on the sun.
The lunar year begins on the day of the second moon after the winter solstice and before the spring equinox. It therefore changes every year and the “Chinese New Year” can start on 21 January but also on 19 February of the Gregorian year!
In 2022, the new year, that of the Water Tiger, will begin on Tuesday 1 February.

In the Chinese calendar, each year is represented by an animal of the zodiac. There are 12 animals and therefore 12-year cycles. Here we find a fundamental notion: contrary to Westerners for whom time is linear, the Chinese consider that time is cyclical. Thus, according to the law of Yin and Yang, every event repeats itself. This is the basis of the I Ching, considered to be the oldest book of divination still in use.

A legend says that just before entering nirvana, Buddha called for the animals. Only 12 animals responded to his call. To reward them, Buddha assigned each of them a year in the order of their arrival. The rat arrived first and was honoured with the first year. Then came the ox, followed by the tiger, the hare, the dragon, the snake, the horse, the goat, the monkey, the rooster, the dog, and the pig.
Another legend tells of a race organised by the Jade Emperor to cross a river. The rat got on the back of the ox (and took advantage of it to push the cat into the water, which is not part of the dream team) and finished first, before the ox, because it jumped on the shore. The pig came last because of a digestive nap.

The 5 elements and the Chinese years

So we know why the year 2022 is expressed with the help of an animal of the Zodiac, the Tiger. But this is not enough, we also need to know its phase according to the theory of the 5 elements (Water, Fire, Metal, Wood and Earth). This is the object of what is called the Celestial Trunks.

Around 2600 BC, the Yellow Emperor asked a wise man called Da Nao (yes, that makes me think of yoghurt too) to create a system that would allow time to be measured. From these observations was born a model of chi and its transformations during the year. The celestial trunks thus indicate how the Chi evolves according to time.

There are 10 and not 5 because in addition to the element, they are characterised by their yin or yang polarity. Thus, the year 2022 has the Tiger as its animal, the Water element as its Celestial Trunk and the polarity is Yang.

Let’s complicate things a bit: the earthly branches also contain one or more elements! For example, the terrestrial branch of the tiger is the wood element. The reasoning that we will follow to know the energies of the year will always refer to the cycle of production, control or destruction. Here, we know that the year of the Tiger carries the energy of growth suggested by the Wood element. The celestial trunk being water, it will come to nourish this wood. It is therefore a year that favours abundance and success. 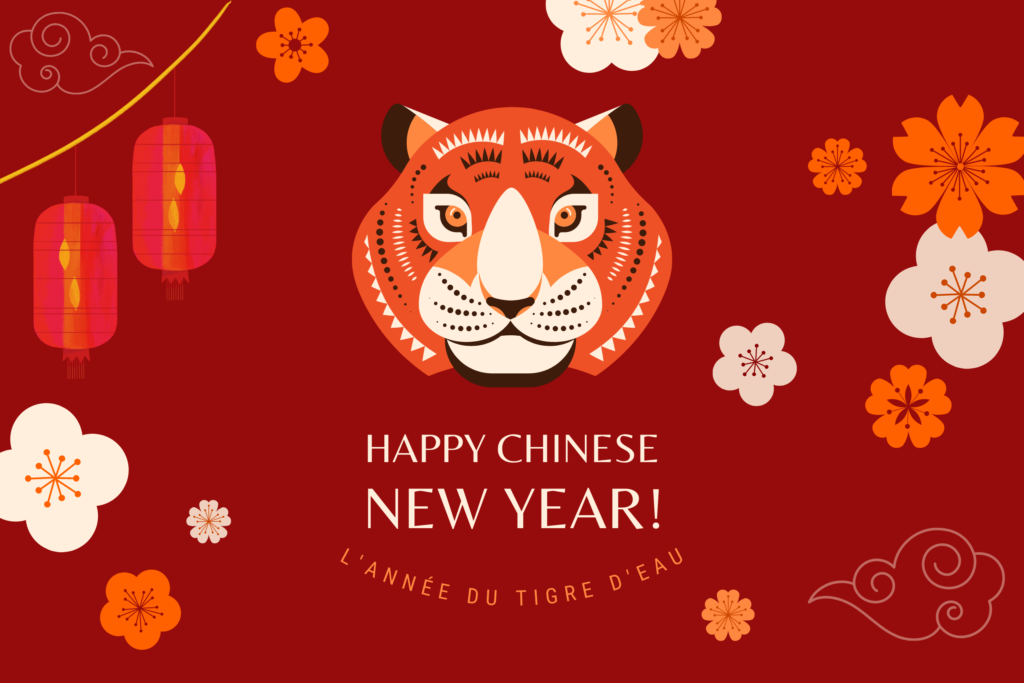 In China, the tiger is known as the king of all animals. The Tiger is a zodiac sign symbolising strength, power and bravery. It brings good luck. It is also romantic, charismatic and independent.

People of the Tiger sign (like all those born in 1974 like me!) will meet their “birth sign year” (benmingnian) in 2022. It is said that in these cases, we are on the edge of our seats and also that we are in a “Tai Sui” situation: basically, it is not the most favourable year for us and we had better keep a low profile. The same goes for the signs Monkey, Snake, and Pig.
I reassure you that I am far from predicting disasters and I am firmly convinced that nothing is more powerful than surrounding yourself with positive waves, thanks to Feng Shui of course, but also thanks to a beautiful optimism!

On that note, I wish you a very happy Tiger Year! 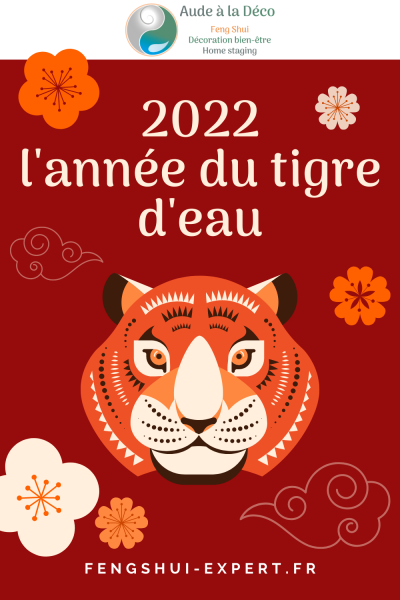