They are said to have been invented by King Fu Xi, the founder of Chinese medicine, who lived in 4500 BC (after all!). He created them to record the observations he made of the Earth and the Sky.

Raymond Lo, in his book “The Essentials of Feng Shui”, refers to the 8 trigrams as the oldest database recording the observations that man has made of his environment.

The creation of the 8 trigrams from Tai Ji

Taiji gives yin and yang. By adding a level, one can either add a yang line or a yin line, which can then produce 4 different pairs, or bigrams.

Then a third line, either yin or yang, is added to each of these 4 bigrams. This produces 8 symbols, the 8 trigrams.

The 8 trigrams, called Ba Gua, represent the maximum number of combinations of 3 elements of yin or yang nature.

A binary modelling of Chi

Doesn’t that remind you of anything? The computer binary code! This code used today in the technological world is a two-digit system, in which the bit can take two values, 0 or 1. Thanks to these two little numbers alone, we can code representations of anything: letters, numbers, words, images, complex systems. It is easy to draw a parallel with the Yin/Yang code which also allows, through the 8 trigrams, to describe the state of everything.

The 8 is also found in computer language: isn’t it based on the byte system, equal to 8 bits?

Moreover, we know that Leibniz, the inventor of the binary arithmetic system, read the I Ching (The Book of Changes), and that he thus discovered the trigrams, then the hexagrams. This confirmed his theory: yes, it was possible to simplify the world, life and situations into a series of simple symbols. Everything had been created by God (the 1) out of nothing (the 0).

There are two possible configurations of Ba Gua:

The first arrangement is not used in feng shui, because it represents the ideal world, perfect harmony, ultimate balance. There is no movement, no interaction, life does not change.

The second arrangement follows the movements of yin and yang, like the living world. The trigrams are placed in such a way that they reflect the cycle of the seasons.

Contrary to Western representations, the South is placed at the top. The North is at the bottom. By construction, therefore, the East is on the left and the West is on the right.

The South represents the summer (symbolised by Fire). If we turn clockwise, Summer gives way first to an inter-season, represented by South-West, of Earth nature, then to Autumn and thus to the 2 trigrams of Metal, West and North-West. The North is Winter, symbolised by the Water element. This water will nourish the wood which, after an inter-season, allows spring to be born: the two trigrams East and South-East thus arrive. The loop is closed, as they say! 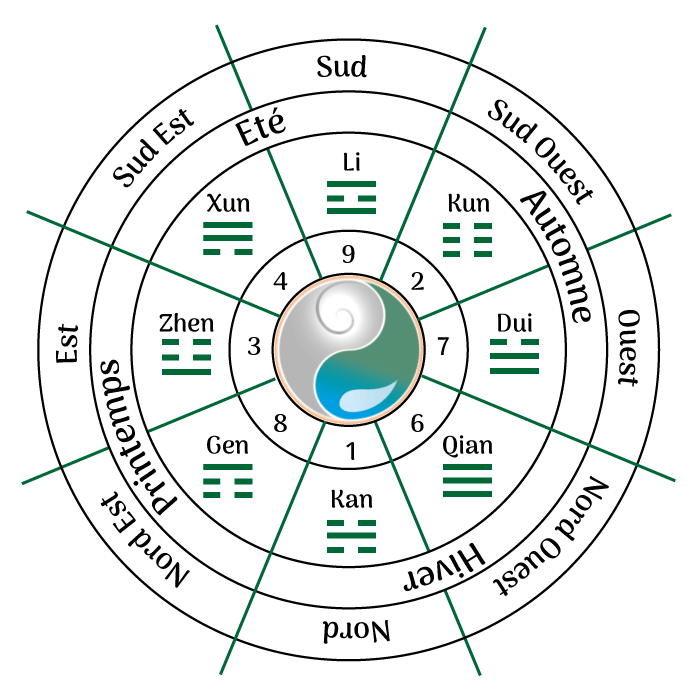 This circle can be represented as a square, which makes it possible to bring it closer to another grid, the magic square, or Lo Shu square. But that’s another story…

The characteristics of the 8 trigrams

The trigrams are therefore symbols representing the transitional phases of all possible situations, whether they relate to nature or to man.

As we have seen, they have a gender (masculine or feminine) and are associated with the cardinal orientations and the five elements. But that’s not all, they also carry characteristics related to colours, organs, personality types or animals.
You will find some of their characteristics in the following table. 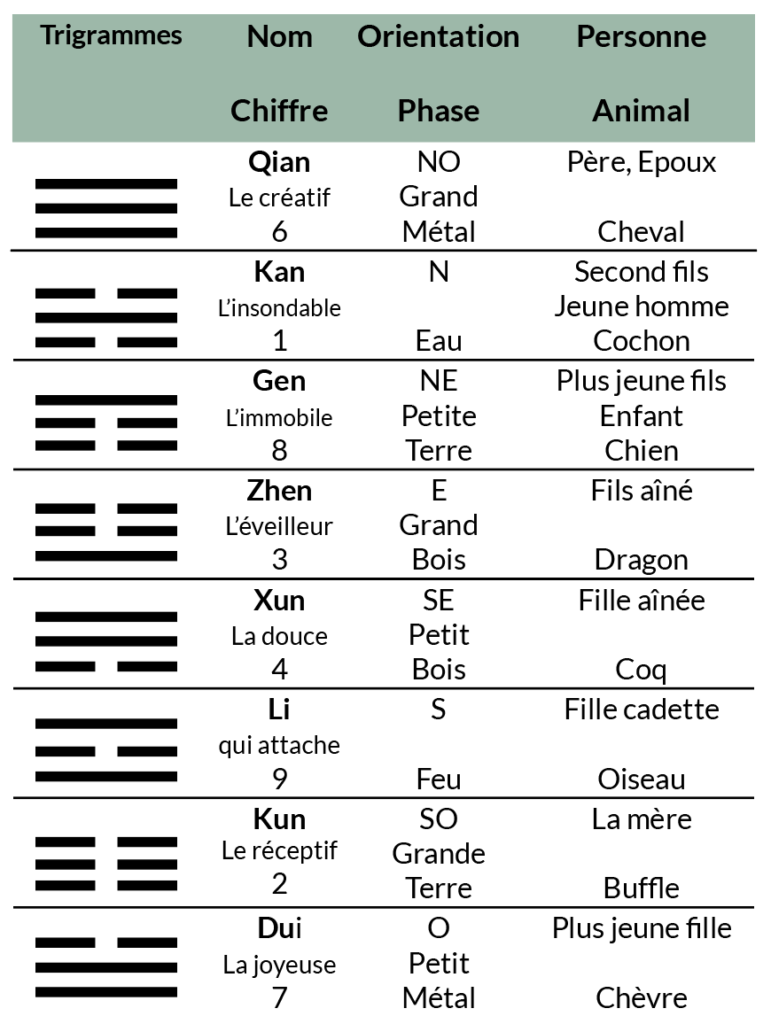 The 8 trigrams and Chinese medicine

In this table, I have not indicated the link with the organs. This link can be used by the Feng Shui expert, who according to the zones and the configuration of the flying stars, will deduce risks on such or such part of the body.

This trigram-organ-phase link is especially essential in traditional Chinese medicine. In acupuncture, these 8 trigrams are also linked to the 8 so-called curious or wonderful meridians.

Just as feng shui will use the phase production cycle, Chinese medicine will use it to link the various organs. The concept is that as long as the elements are balanced, the person is healthy.

For example, the Kan trigram has water as its element. It is related to the kidneys, bladder, ears and genitals. The trigram Li, fire, is associated with the heart and eyes. Thus, in case of heart problems, one must avoid excess of salt because the taste of salt corresponds to the Water element and Water destroys Fire and therefore the heart.

The 8 trigrams have been used to model the movements of Chi, each trigram representing a pattern of movement and change. They have characteristics that are related to the study of nature, the seasons, but also to human behaviour. They are related to the cardinal points, certain colours (the same as for the 5 phases: grey for metal, green for wood, etc.), organs…

Putting the bagua on the plan of a house allows the feng shui expert to determine the characteristics of the sectors and thus to define the appropriate arrangements.

To deepen the analysis thanks to the method of the flying stars, it will be necessary to complicate a little the bagua, by dividing each direction of 45° in 3 components of 15° in order to form 24 directions: it is about the 24 mountains. 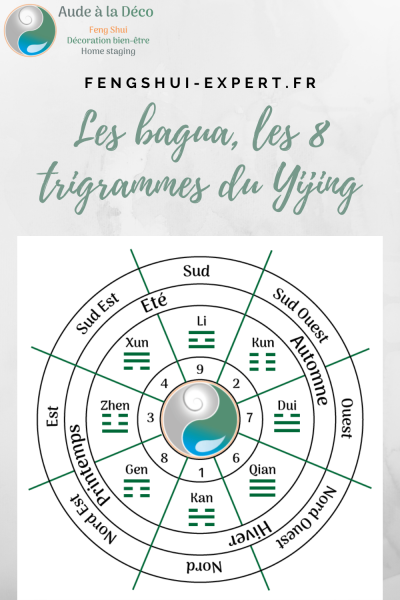