For this first article of the year 2022, I continue my series on the symbolism of colours. After red, green, blue, yellow, white and black, here is pink.

Did you know that pink is not even a colour, scientifically speaking?  Yes, it is not associated with any wavelength, unlike red. In fact, pink has no place in the rainbow or in the light spectrum.
Let’s take a closer look at pink.

It was just a faded red. Red was the colour of power and strength: from the Middle Ages to the Renaissance, pink was in fact a manly colour! (Remember the portrait of Henri IV dressed all in pink).

It was not until the 14th century that dyers were able to create a pretty pink from Brazilian wood.  But as this exotic essence was expensive, only the most powerful people could afford to wear pink.

It was not until the 18th century that pink became more democratic. According to the legend, it is to Madame de Pompadour that it owes the rise of its popularity, and its success among women. It also acquired at that time its current symbolism: romanticism, femininity and softness for the positive side, and mawkishness and futility for its less rewarding side.

On the other hand, the fashion of “pink for girls, blue for boys” is quite recent and dates only from the middle of the 20th century, and even then, in the West. Before, it was the opposite: blue, calm and soothing, was recommended for girls, while pink, more decisive, stronger, was better suited to boys’ characters.

The Psychology of Pink

As we have seen, pink is not associated with any wavelength. In painting, pink is a washed red, i.e. a red to which white has been added. But for science, pink is in fact a superposition of different wavelengths (those of red, blue and violet), and our brain performs an additive synthesis. It is also said that pink can be obtained by removing all the green light from the white light spectrum.

Pink expresses a caring and emphatic love. It is tender and romantic. It makes us think that life is beautiful. Pink is a big hug! It’s not just a girl’s colour, it’s full of positive energy. There are so many shades, each one sends a different message.

Soft, warm pinks are physically soothing, strong, cool pinks are intense and therefore stimulating. They have a temperament. For balanced people, they should be used in dashes.

Pink is at home in every room.
In the bathroom, it brings a good mood.
In children’s rooms, it soothes tension and comforts.
In adult rooms, it is useful in cases of grief and loneliness. In soft tones, it reassures and calms. It relaxes muscles and regulates blood pressure.
In the living room, choose a magenta or Indian pink.
In professional premises, it is useful for all professions where hope is needed (in nutritionists’ offices, in hospitals, etc.). Elsewhere than in France, it is also widely used in prisons for its soothing properties.

It likes to be associated with grey, red for a bohemian spirit, yellow (to accentuate the luminosity of pink), blue in a warm-cold way, and black for a luxurious and feminine duo.

In feng shui, pink is, like red and purple, the colour of the FIRE element, of the South, of summer.

Thus, if you need to nourish a fire zone, you can bring pink in the form of applat (a wall painted in pink), furniture (a sofa, an armchair…) or accessories (bedspreads, tablecloth, cushions, decorative objects…).
The saturation, hue or brightness of the colour pink is not important. However, it will have an importance in colour psychology, which is why it is very relevant to make choices by mixing the two disciplines. 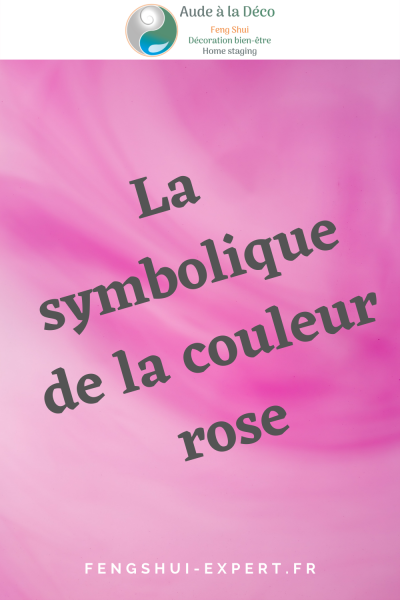 You may also like, the symbolism of the color: